Southwest France is the land of the troubadours – poets who sing about the “fin d’amor” (perfect love) and the quests to win over the ladies. It is also the land of “Occitan”, the langue d’oc that is closer to Latin than French, the langue d’oil, which is more Germanic. Ethnically and culturally, the region is also influenced by the Basques from Navarre. Above all, it is the land of the Romanesque – an art and architectural style predominant from the mid 10th century to the beginning of the 13th across Southern France.

Romanesque churches use as their prototype the Roman basilica – a building with a central space or nave, often with aisles or collaterals on either side. It is defined by the round arch – as opposed to the Gothic pointed arch – a direct copy of the Roman originals, using the same classical proportions: multiples or halves of the diameters of circles. To make the nave rise above the aisles and thus allowing light in through a row of windows, the walls were thickened and huge barrel vaults were created as supports, making them distinguishing features of Romanesque architecture. The combination of arches within arches with crossing barrel vaults frequently combines to provide an extraordinary sculptural space that emits solemnity as well as simplicity. 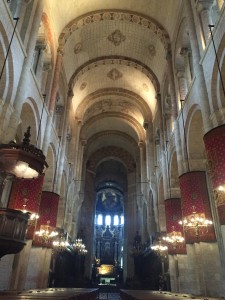 The great beauty of the Romanesque is its solidity and lack of pretensions, allowing it to exude a quiet vigour and simple grandeur. Nowhere is it more evident than in the Basilique St. Sernin in Toulouse – the most famous pilgrimage churce in Southern France and the largest Romanesque church in the West. Construction began in 1080 and finished in the 14th century. It was built to accommodate the large numbers of pilgrims en route to Santiago de Compostela in the west Spain.

The basilica on top of the hill in Vezelay radiates a similar grandeour and solidity, but it is also prominent in other ways: 1. Three crusades were launched from this hill: the Second Crusade (1146), the Third Xrusade (1190) under Richard the Lionheart of England and King Philippe August, and the Seventh Crusade (1248) by King (and Saint) Louis IX; 2. It holds the relics of Mary Magdalene; and 3. The carvings on its portals and capitals are unmatched. 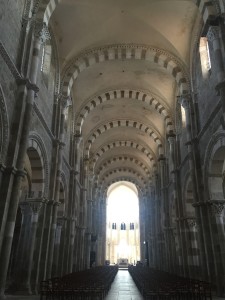 An inner portal holds one of Romanesque art’s signature piece – the risen Christ ascending to heaven and shooting Holy Ghost rays at his apostles, telling them to preach the gospel to the people Below are a cross-section of a diverse humanity: hunters, fishermen, farmers, and men with animal features.

The capitals of the nave’s columns are carved masterpieces of saits and Bible scenes. Among the most well-known: the “mystical mill” showing Old Testament Moses and New Testament Paul working together to fill sacks with grains (and, metaphorically, the Bible with words). The Capitals tell stories and are meant to be viewed one after another like panels in a comic book. 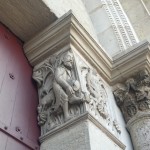 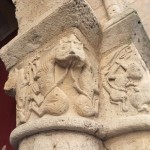 The Crypt is the foundation of a ninth century church and holds the relics of Mary Magdalene. 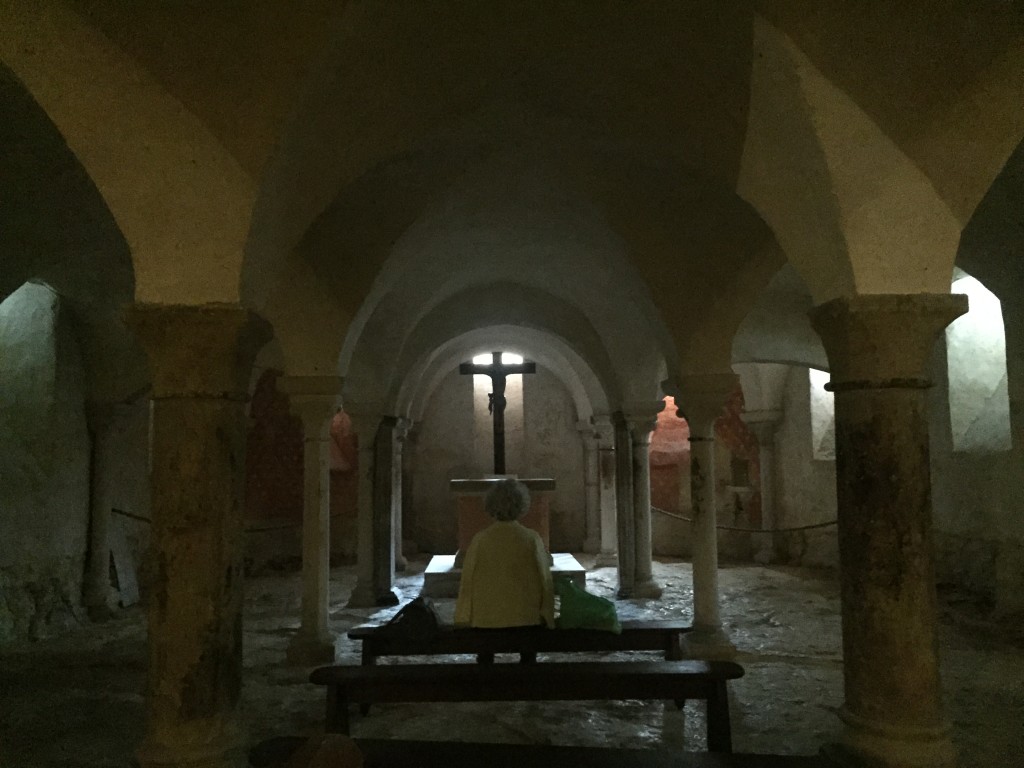 At the end of the nave is the choir, constructed in a later Gothic style, which is lighter, brighter and soaring, but also more monotone and sterile. 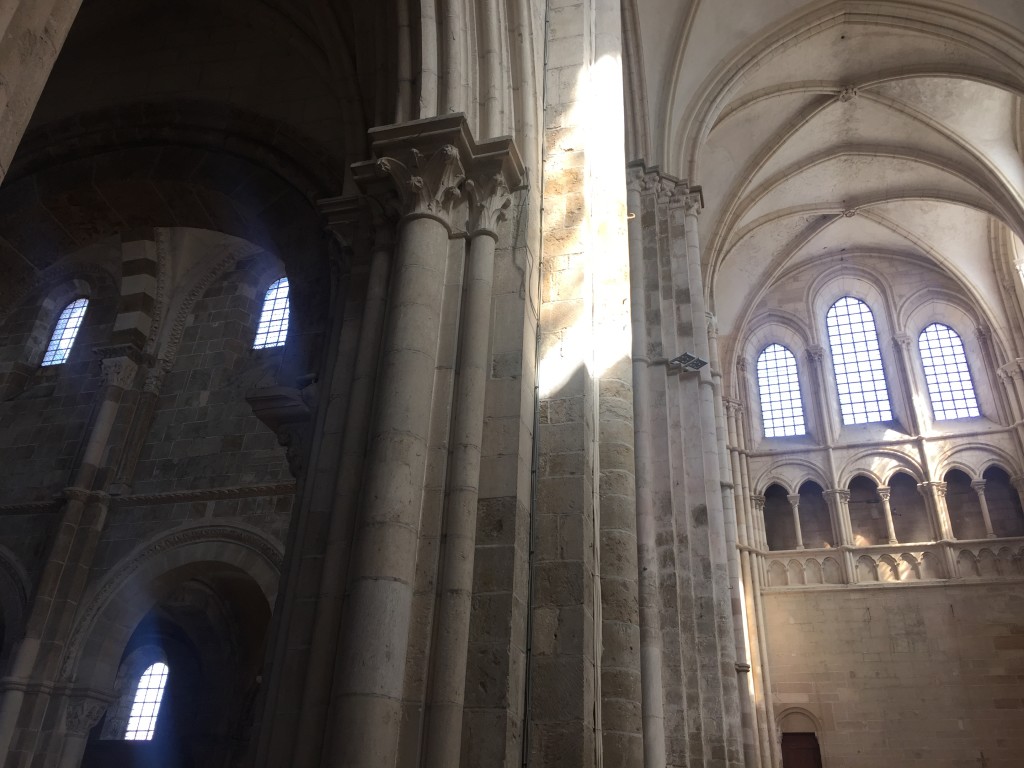 On the outer walls of the Basilica are decorative works with animist carvings.

Naïve or animist carvings or portraits of villagers are often found in Romanesque churches of this period, when Christianity was just beginning to establish itself in opposition to the old religion of the forest. The Carved column and portal in Souillac is a prime example. 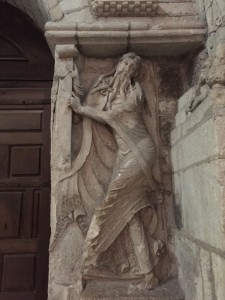 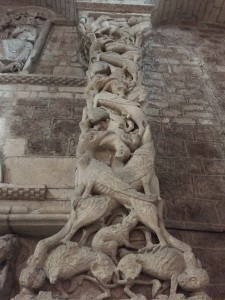 The western face of the Notre Dame – the most important church in Poitiers – combines story telling with animist carvings. One one panel above the door in high relief are Adam and Eve, Nebuchadnezzar II, and other figures and sotries from the Bibles, such as Moses, Isaiah, King David, the Annunciation.

Rebuilt in the second half of the 11th century, it as preserved the medieval tradition of painting churches.

Besides Toulouse, Poitiers is one of the most important towns and power centres in the Southwest. Eleanor of Aquitaine, one of the most powerful figurs in Western European history, was born in Poitiers and inherited at 15 the Duchy of Aquitaine which extended from the Loire to the Pyrenees. She married King Louis VII of Frnace, went with him on the Second Crusade to Jerusalem, then remarried the future Henry II of England, and was mother to two English Kings: Richard the Lionheart and John (who later became infamous for signing the Magna Carta). One of her most fondly remembered accomplishments, however, was her champion of the troubadours, following in the footsteps of her father Willliam, the duke of Aquitaine. 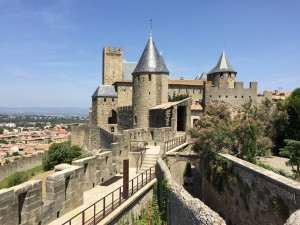 Aside from its distinguished culture, language and architecture, Southwest France was also home to the Cathars (or Albigensians after their stronghold city Albi) – a religious group who were Christians but advocated a more spiritual and simpler way of life in defiance of the Roman Catholic Church. During its Golden Age, Carcassone, a fortress city east of Toulouse, known as La Cite, allowed Jews and Cathars to live within its walls.

In 1209, Pope Innocent III with the tacit approval of the French King launched the Albigensian Crusade. The Campaigns and long sieges finally wiped out the Cathars in 1255, by which time, the crusade had turned into an assertion of the power of the French King over the unruly and independent local rulers of the Southwest.

Basilique St. Nazaire with the walls of Carcassone is a reminder of the assertion of the power of the orth over the South. Parts of the originally Roanesque church were destroyed and replaced by structures in the newer Gothic style which was popular in the north.

Perhaps the best example of the suppression of the Cathars and the rule of the French Court over the region was the St Cecile Cathedral in Albi—the heart of the Cathar “heretics”. Big and bold, the cathedral is the biggest brick building in the world, and stood to make clear who was in charge. It looks more like a fortress than a church.

Completed in 1494, the simple Gothic style was designed to be sensitive to the anti-materialistic sensitivities of the local people. The oldest art in the cathedral is the Last Judgement (1474) behind the altar, the largest such painting from the Middle Ages. Otherwise, the elaborate and impressive interior is largely a 19th century Romantic era renovation. 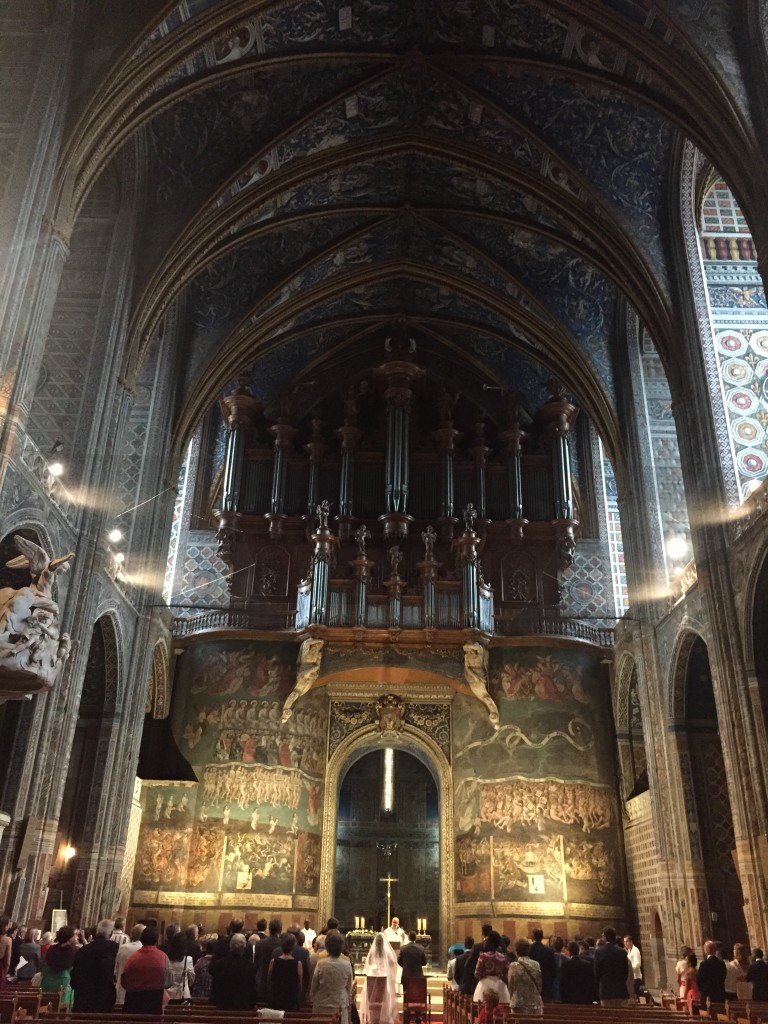